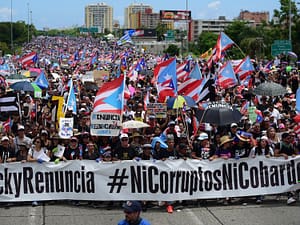 “We, the people of Puerto Rico, are living through the death of the Estado Libre Asociado (ELA), our neocolonial commonwealth project; which defined the promise of what this archipelago would become in the 20th Century. What began as a constitution pledging third world capitalist development and democratic self-governance has collapsed, a process accelerated by the sedimentation of natural, political and human catastrophes.”